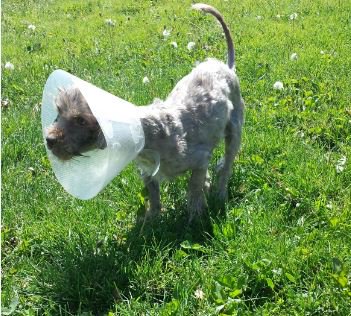 He was found wandering the streets of Lancaster, California. Like thousands, probably millions, of other stray dogs, he was sick and starving. Nothing but bones and matted fur, an infected wound festering on the side of his face, days from death.

Anemic, his intestines wriggling with parasitic worms and foxtails (those scrubby plants that grow in parking lots) embedded throughout his body causing infections even in his eyes and lodging in his carotid artery, George teetered between life and death for almost two weeks before finally stabilizing.

The kind soul who picked this little lap-sized pup from the street named him Colt and started tweeting about his story on April 22. She has been his voice, first trying to find out who abandoned him, then talking about his treatment, his desires and his relief at being able to poop.

Yes, even bodily functions are shared.

Colt has been renamed George by one of his fans. He can be followed on Twitter at @Pistol_George and be warned, if you scroll down to his early days, it's not pretty. Here's what he looked like a few days after rescue. 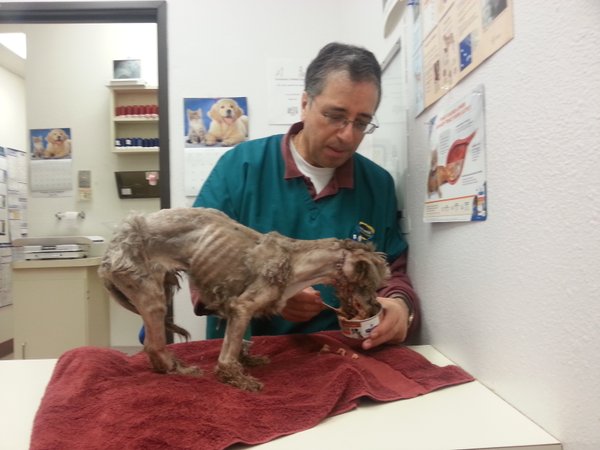 George has proven to be a fighter. So has the woman who saved him. She has had to be, because as soon as a gofundme account was set up to cover a portion of George's veterinary care costs, someone came out of the woodwork to claim the little mutt as her own. Not only that, but the first vet clinic George went to suddenly hiked up the cost of care.

George's rescuer took him to another clinic, where it was realized the first clinic had been making his condition worse, she cut off the gofundme and she's taken on the rest of his bills and his care by herself.

As if worrying non-stop about whether George would survive, paying his vet bills and caring for him at home wasn't enough, she also had to deal with people void of morals or conscience.

Scumbags aside, if you fastforward to the present, George has packed on two pounds, he's visited a few of his 500-plus fans and he's shared all kinds of information that our mothers taught us wasn't appropriate under any circumstances.

He doesn't just focus on himself, despite fans clamouring for updates to reassure themselves he's okay. George talks a lot about the other stray dogs still living on the streets, animal abuse and how it's better to adopt a pet from a rescue than buy from a store.

George's plight went public through social media. For a brief time, it brought out the worst in people. But for the most part, the good ones have shone through.